The Magnify team recently set off on a weekend-long road trip from our offices in Vancouver to the BC interior to deliver two training sessions on discoverability for the creative industries.

The Magnify Discovery Lab training mini-tour was made possible by various funders including TELUS Storyhive, The Bell Fund, The Canada Media Fund, The Shaw Rocket Fund, The Canadian Film Centre Media Lab, The Independent Production Fund, Creative BC, AQPM, and the CMPA-BC. John Cameron-Ingliss, Mastermind Studio CEO and Founder, was the driving force that brought the workshop series to the interior.

The funders are interested not only in funding great Canadian stories but ensuring that content is seen by as many people as possible. The tour, an extension of the nation-wide tour we rolled out last November, was a great opportunity for Magnify to help supply producers with the tools and tips that drive discoverability.  With that in mind, it wasn’t long before we found ourselves navigating the lunchtime traffic and looking back at Downtown Vancouver in the rear-view mirror.

It’s easy to see why content producers are choosing the BC Interior to tell their stories. The cinematic mountain tops and lush forestry intermingled with freight trains threading through the deep valleys are a filmmaker’s dream. 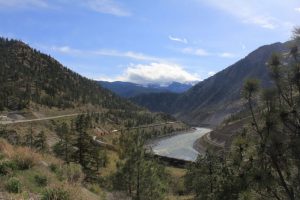 Our first stop was Kelowna, a mix of urban and rural with stunning scenery, beautiful vineyards and small-city charm. The first training session took place at Summerhill Winery which was followed the next day by a session at Mastermind Studios, a Kamloops video production agency run by President, CEO & Exec Producer, Peter Cameron-Ingliss.

Kamloops has been used as a range of locations for various feature films including “2012,” “The Sisterhood of the Traveling Pants,” “Shooter,” “The A-Team” and “An Unfinished Life” featuring Jennifer Lopez, Robert Redford and Morgan Freeman.

Magnify’s training sessions were presented by Moyra Rodger, CEO and Magnify Digital Founder, and Tom Sprinks, Digital Strategist and MDL Trainer.  Moyra spent the morning sessions discussing the two parts of discoverability – placement and awareness. Essentially, placement deals with supply and how to put content where audiences can find it. This included discussing the shifting dynamics between online viewing and traditional TV. Lastly, awareness is about driving demand and reaching out to audiences to let them know your content exists. 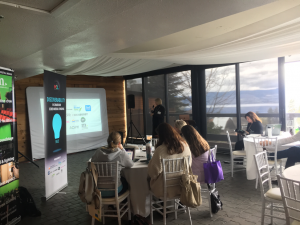 The case studies are always a popular section of the presentation. They look at real-world examples of outstanding discoverability strategies. One of the case studies that resonated most with participants was Netflix’s, Bojack Horseman. You can read about their often hilarious audience development tactics in Magnify’s recent post – ‘6 Lessons In Digital We Can All Learn From Bojack Horseman’.

The workshop attendees were a fantastic blend of TV producers, filmmakers, writers, digital media creators, and actors, keen to learn how to create effective discoverability strategies that will strengthen their applications for funding. 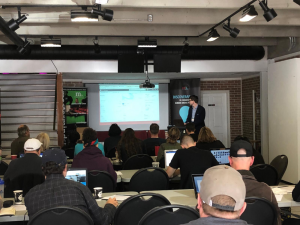 In the afternoon, our Digital Strategist Tom discussed how to find target audiences using social ad platforms, Google Trends, Google Correlate and some of the tools we use to identify influencers. Participants were particularly keen to discover Google Correlate, a tool that enables people to look at patterns in search over time. This tool can be handy for producers in identifying audience interests.

The mini-tour was a great success, based on the generous feedback of participants. It fired us up to get to work on this year’s national tour targeted to roll out in September. Not only that, we found it was a great chance to meet the talented and wonderful creators in the amazing BC interior. 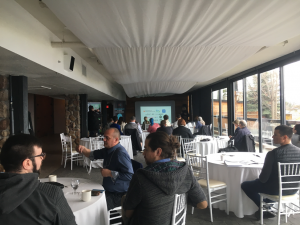 So, after grabbing a couple of last-minute doughnuts from the vast Tim Horton spread generously supplied by Peter, we set off home – the trunk a little heavier from a few bottles of delicious Summerhill wine – with John Denver on the radio and the distant sound of a Canadian Pacific train rolling into the night.