The Great Bear Rainforest is a 45-minute documentary that brings British Columbia’s secluded protected area of the same name to IMAX screens for the first time in history.

Shot over the course of 18 months, and directed by Ian McAllister, co-founder of the non-profit conservation organization Pacific Wild, the film aims to educate its audience about the plight of the Spirit Bear – a rare subspecies of grizzlies only found on the Pacific East Coast that number fewer than 400 in population.

The film was initially released on February 15ththis year exclusively in IMAX screens across North America. To maximize viewership, the documentary was screened three times a day for the initial three months at participating IMAX locations.

The Great Bear Rainforest is a vehicle for the charitable and conservational goals of its creator producer Ian McAllister which included:

Achieving these goals depended on implementing the right discoverability strategy. To grow his strategy, McAllister leveraged a host of personal and professional connections. These included: 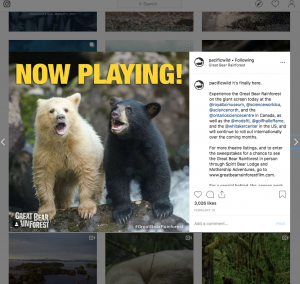 Seaspan is one of the Pacific Northwest’s biggest marine logistics firms. A chance lunch between Ian McAllister and Seaspan’s Executive Chairman, Kyle Washington led to the film receiving a large portion of its funding.

With funding in place, McAllister and his crew spent three years filming throughout the remote reaches of the Great Bear Rainforest with the latest filmmaking technology. Kyle Washington also became heavily involved with the film’s post-production and script.

The producers later approached Vancouver born actor Ryan Reynolds to narrate the film.  This was particularly well-received, with Reynold’s narration adding charm and wit along with levity when needed. 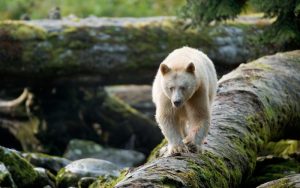 The provincial tourism organization, Destination BC sponsored the international distribution of GBRF which was beneficial for both parties in terms of discoverability.

DBC saw an opportunity to use the film as a vehicle to “drive awareness and consideration of the whole province as a tourism destination”. This meant the film was heavily promoted online by DBC with additional content being created offline.

Spirit Bear Lodge is an indigenous-owned experiential retreat that offers tours within the Kitasoo Xai’xais region. It’s here, deep in the rugged British Columbia wilderness, where you find the fabled Spirit Bear.

The connection between McAllister and Spirit Bear Lodge was particularly meaningful not only for the film’s marketing campaign but also to the story itself.

McAllister brought worldwide attention to one of the last truly wild and bio-diverse places through the interwoven stories of the Kitasoo Xai’xais people.


SO, WHAT CAN WE LEARN FROM THE GREAT BEAR RAINFOREST AND MCALLISTER’S DISCOVERABILITY PLAN?

“We are a visual species, and as a conservationist, I have always believed that visual storytelling is one of the best ways to inspire people to protect a place.” – Ian McAllister

LEVERAGE YOUR NETWORK AND BUILD CONNECTIONS

You don’t have to go it alone. Think about how you can collaborate with people already in your network to work towards shared goals. You never know who might be interested in helping.

GBRF’s discoverability campaign was supported by a toolkit for educators and an online content hub that goes behind the scenes and speaks to the people involved in its creation. This was a great example of multiple content ideas coming together to tell one story. The diverse range also included:

What’s interesting about GBRF is its length – 45 minutes – and its distribution plan. By going only into IMAX theatres at science and education institutions, keeping the film under an hour, and having it air three times a day, they opened it up to teachers integrating IMAX field trips into the year’s curriculum. 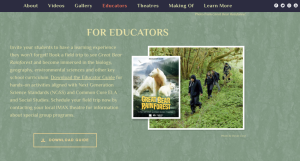 McAllister’s discoverability strategy for The Great Bear Rainforest is a great example of discoverability done right. He successfully achieved his goals by putting content where audiences could find it online and let them know it existed through his connections and partners.