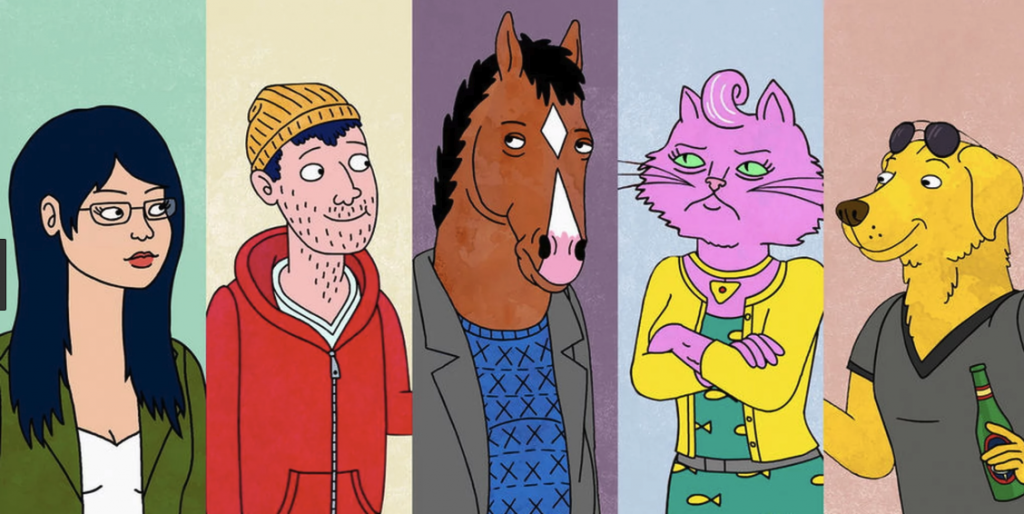 With five seasons now under its belt, Netflix’s BoJack Horseman has established itself as the clear frontrunner in the adult animation race. Despite Season 1’s lukewarm reception back in 2014, today, it’s often ranked as the best Netflix Original of all time (and that’s not just animated originals). It’s been nominated for a slew of awards for its voice acting, animation, approach to dealing with mental health issues and social commentary, not to mention their wholly original digital marketing strategy. We’re most interested in that last bit.

Back in the 90s, BoJack Horseman was in a very famous TV show called Horsin’ Around. Today, he’s an alcoholic, drug-addled, self-destructive 54-year-old still living off his past glories in his Beverley Hills mansion, desperately trying to revive his career in order to validate his own existence.

In the BoJack Horseman universe, characters are either human or anthropomorphic animals. The main cast is completed by BoJack’s long-time feline agent/occasional lover Princess Carolyn, his human biographer Diane Nguyen (who, in later seasons, runs his social media campaigns that crossover into real life), Todd Chavez – the guy who sleeps on his couch, and his eternally optimistic best friend/worst enemy golden retriever Mr. PeanutButter. 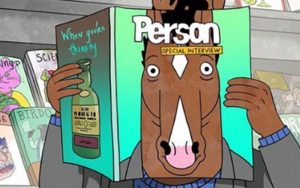 Over its five seasons, BoJack makes his big-screen comeback in Secretariat – a biopic on a troubled racehorse of the same name – fails miserably at his first return to TV (2008’s The BoJack Horseman Show), and later flourishes as a small-screen detective in Philbert.

Off the screen, BoJack continues to make bad decisions and life choices that see him descend into full-blown opiate dependency and delusional behaviour, pushing away almost everyone close to him.

So that’s the synopsis. Below, we’ve extracted a few lessons from how the producers and Netflix have harnessed the power of their digital platforms to expand the BoJack Horseman universe, and build a hyper-engaged fanbase.

Are you sitting comfortably? Then let’s begin with lesson 1:

YOUR SHOW IS JUST A VEHICLE FOR THE UNIVERSE YOU CREATE

Don’t jump on the defensive – hear us out first.

You aren’t selling a 12-block of 22-minute episodes, or whatever your broadcast deal might be. You’re getting viewers to buy into the world you’ve created – the whole universe with its characters and their personalities, the plot lines, the locations, the messages and moral compass that guides your characters’ decisions, and the events that surround them. So why limit your canon to just what appears in broadcast?

By doing just that, you’re cutting off endless opportunities in which to bring your show’s universe into the day-to-day lives of the fans watching it.

Using the @BoJackHorseman feeds as an extension of the in-show action is a smart and savvy way to connect with their key demographic. In doing this, they bring original content, inside references and meta jokes directly into the fans’ newsfeeds.

What’s unique to the BH approach, is that that if you don’t watch the show, a lot of the digital activity and posts you see won’t make sense. Only after they’ve been referenced in-broadcast do they have value to the viewer. These kinds of Easter Eggs help viewers connect with a show emotionally, by making them feel like they’ve discovered something that isn’t obvious to the untrained eye.

And, because of that…

There is no rehashing or repurposing of content in the BoJack Horseman strategy. Everything that’s put out across his social platforms and other digital touchpoints is 100% bespoke for that channel, so much in fact that the date of last period due date Instagram feed is entirely composed of original illustrations and animations.

This has allowed them to…

ON THAT NOTE… LOOK OUTSIDE OF YOUR COMFORT ZONE

A digital strategy is more than just posting to Facebook and Twitter. It’s important to know where your audience lives online, how they’re interacting with content, and what they’re talking about.

Perhaps due to its self-deprecating nature, BoJack Horseman has a solid fanbase across Tumblr with countless screencaps, meme accounts and blogs dedicated to jokes you might have missed, while the r/BoJackHorseman subreddit boasts over 240K active community members.

In many ways, this awareness of where the fanbase lives online has informed elements of the show’s content. For example, in S3E9, BoJack frantically tries to keep a food critic happy at his restaurant after the head chef quits. After 22 minutes of chaos trying (and failing) to keep the win her over, we get this great little exchange.

Critic: “Unfortunately, you will be receiving my lowest rating: four hundred and twelve stars, out of a possible a billion. That’s the rubric I use on SamanthaGoesToRestaurants.tumblr.com”

Of course, the show’s producers didn’t miss the opportunity to turn that into an ACTUAL Tumblr Blog, complete with the review of BoJack’s Elefante restaurant (and other reviews of fictional restaurants around Hollywoo (the show’s version of Hollywood)). 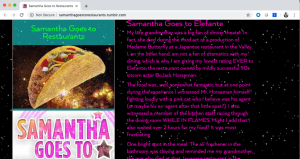 This little reference plays directly into the mentality of the Tumblr community – who are especially welcoming of mainstream nods to the platform.

Traditional marketing campaigns often overlook Tumblr as a channel – it’s a tight-knit community without any real advertising avenue. Not to mention, many advertisers just don’t get it. Including the Tumblr community in the overall BH strategy shows that the producers are aware of their audience, where and how they spend their time, and crucially, that they’re listening.

ENGAGE WITH SHOW PARTNERS, BROADCASTERS, AFFILIATES (AND FANS!) IN AN AUTHENTIC WAY

Dude, it’s because you asked me to cover your Amazon bill so you could watch Fleabag.

…the real-life voice actors and producers…

why would either of you keep the trophies when i won them also im pretty sure i was the one masterfullly performing not @arnettwill https://t.co/vtTvTUYng1

you mean courtesy of me im the most generous celebrity on twitter https://t.co/zFIjTGFwTD

…or charitable giveaways that harness original, on-brand content, it all feels authentically and confidently delivered. The boldness of the copy, creative and approach taken would only work if done with total conviction – there’s no half-jobbing a strategy like this one.

As for fans, this exchange…

wooowwww congratulations you are the 10000000 person to ask that question your prize is the answer sept 14th now please stop asking me https://t.co/YlMPphjRdq

… shows how by leveraging just one fan interaction, they can create a truly valuable newsworthy moment. The surprise, low-key ‘announcement’ of Season 5 climbed right to the top of Reddit, made frontpage news on EW, HighSnobiety, Vulture, Deadline, Fader and other media outlets, who all commended the boldness of the underplay tactic.

Once the cat was out of the bag, the BoJack account then went on a 20+ hour live tweet rewatch of every episode so far, clocking in 590K engagements and 19M impressions. Because why not, eh?

ALL DIGITAL NEEDS TO WORK TOGETHER

Despite all this incredible work we’ve looked at above (and the bits we’ve skimmed over), for reasons that aren’t entirely clear the Official BoJack Horseman Facebook page is desperately out-of-step with the rest of the show’s digital activity. It simply reposts content from the other official channels with a ‘fanboy’ (or fan-horse?)-type approach.

Why is this? We have a couple of theories…

When the show socials were first set up and the intention was set to run everything in-character as BoJack, Facebook was probably seen as the most unlikely platform for him to be using in a personal capacity, so the producers didn’t invest in it at the time. As the show’s popularity picked up, it’s possible a decision was made to activate the official Facebook, but at this point, the digital strategy was so successful, it was a risk to try and bring the platform in line with all the other activity so a simpler approach was needed.

Thanks to Facebook’s latest transparency update, we’re able to see that over 350 personal accounts across the globe have admin access to the @BoJackHorseman Facebook page. It’s possible that the expertly-crafted strategy they’re pumping out across other platforms just wouldn’t feasibly work with that many hands in the pies, so a simpler approach was adopted.

AND FINALLY: BE CREATIVE… AND HAVE FUN!

There’s nothing boring here, is there? Remember that when it comes to putting together your own discoverability strategies and marketing campaigns. You can have fun with the work you’re doing, you can be as creative on your digital platforms as you are in your show, and if successful, no part of the end product will look like – or feel like – hard work.

That’s enough from us. Now sit back and enjoy the video below that digital agency Hi5 submitted for the 2019 Shorty Television Awards. It’s got #numbers if that’s more your thing.